Quite recently, we have started a series of articles to introduce our readers to the latest achievements in cancer treatment, using genetically modified T lymphocytes. In the first three blog posts, we have focused mainly on CAR-T cells (links 1, 2, 3). In the last article: “Reaching beneath the tip of the iceberg…”, we have switched our attention to a different approach – TCR-T therapies, developed to target intracellular tumor antigens. Now let’s see how both of these approaches face off against solid tumors, which account for approximately 90 percent of all cancers.

Despite the different ways of antigen recognition by CAR-T and TCR-T cells, a complex immunology and physiology of solid tumors is a significant barrier to successful tumor elimination (Fig. 1) (Labanieh 2018). 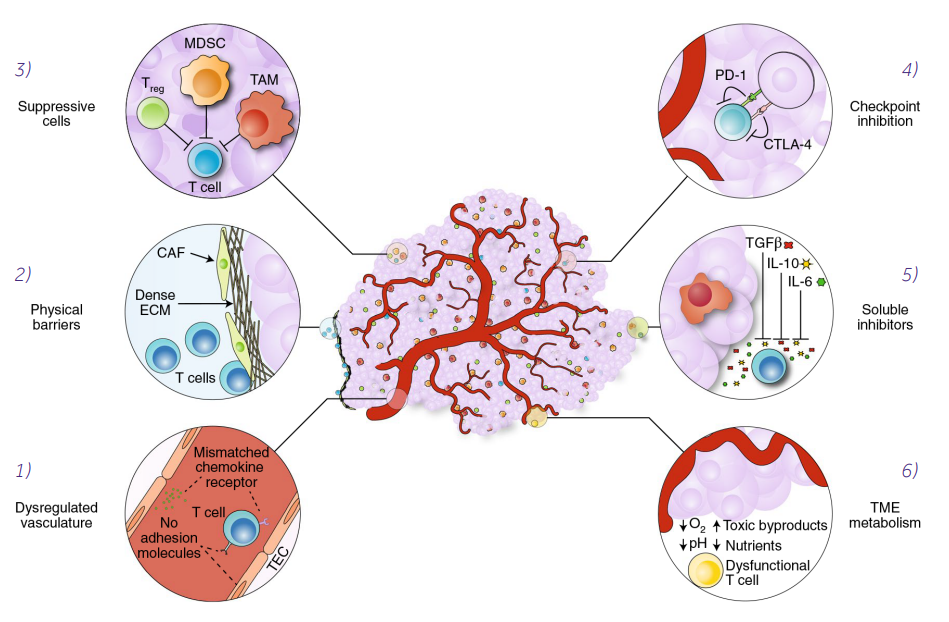 Figure 1. Mechanisms of immune suppression in the tumor microenvironment.
T-cell homing and infiltration is impeded by mismatched chemokine receptors and by the lack of adhesion molecules in the dysregulated tumor vasculature (1). Cancer-associated fibroblasts (CAFs) create a physical barrier to T-cell infiltration by maintaining a dense extracellular matrix (ECM) (2) that traps T cells at the periphery of the tumor. Tumor-associated cells, such as regulatory T cells (Treg), myeloid-derived suppressor cells (MDSCs) and tumor-associated macrophages (TAMs) support the tumor by suppressing immune responses (3). T cells can be inhibited through checkpoint receptors, such as PD-1 and CTLA-4, which are engaged by cognate ligands expressed on tumor cells or tumor-associated cells (4). Soluble inhibitors in the form of suppressive cytokines (TGF-β, IL-10 and IL-6) disrupt T-cell effector functions (5). The metabolic milieu of the tumor microenvironment is unfavorable to effector T cells owing to a lack of nutrients, acidic conditions and toxic byproducts (6) (Labanieh 2018).
https://www.nature.com/articles/s41551-018-0235-9 used under CC-BY license

The major challenge for T cell-based solid cancer therapies, unlike the hematological malignancies, is overcoming the highly unfavorable conditions in the tumor microenvironment (TME). Immunosuppressive TME may not only inhibit T cell activity, but also affect some essential functions of adaptive immune response, like homing and trafficking. The main immunosuppressive signals are the release of transforming growth factor-β (TGF-β) and interleukin 10 (IL-10) and/or the activation of immune checkpoint receptors on T cells, such as PD-1 and CTLA-4. Another important problem, determining the success of solid tumor elimination, is metabolic suppression of T cells, e.g. due to the lack of glucose and glutamine, or key amino acids such as arginine and tryptophan (Labanieh 2018).

Based on the clinicaltrials.gov, approximately 70 clinical projects using CAR-T cells against solid tumors are currently underway. The information about the first solid tumor CAR trial was posted on this site in 2003, when investigators used anti-L1-CAM-CAR-T cells to treat patients with neuroblastoma (Park 2007) (NCT00006480). Other early studies concerning solid tumor trials include the anti-GD2-CAR-T cells in neuroblastoma (Louis 2011) and the anti-CAIX-CAR-T cells in renal cell carcinoma (Lamers 2006). Among all studies listed on clinicaltrials.gov, 32 unique solid-tumor antigens have been evaluated as targets in early-phase clinical trials. The most frequently targeted antigens in solid-tumor CAR-T cell trials are: mesothelin (MSLN), ganglioside (GD2) and epidermal growth factor receptor (EGFR) (Pinte 2021). Other currently investigated antigens that are worth mentioning are: human epidermal growth factor receptor 2 (HER2), carcinoembryonic antigen (CEA), mucin 1 (MUC1), epithelial cell adhesion molecule (EpCAM), claudin 18.2, natural-killer receptor group 2 member D (NKG2D) and folate receptor 1 (FOLR1). Despite a large amount of research, there is still no significant breakthrough in the effectiveness of CAR-T cells and so far, no such therapy is clinically approved for solid tumor treatment.

Under immunosuppressive conditions in TME, the one-way approach seems to be insufficient, as demonstrated by a study conducted on a group of 10 recurrent glioblastoma (GBM) patients (O’Rourke 2017). The patients were given intravenously a single dose of autologous T cells, engineered against the epidermal growth factor receptor variant III (EGFRyIII). Immunohistochemistry of the tumor microenvironment in GBM specimens, before and after anti-EGFRvIII CAR-T cell infusion, has shown reduced EGFRvIII expression, up-regulation of indoleamine 2,3-dioxygenase 1 (IDO1), programmed cell death ligand 1 (PD-L1) and also recruitment of IL-10-secreting regulatory T cells. Although no clinical benefit could be definitively determined from such a small study, modified CAR-T cells effectively migrated to the brain tumor and exerted on-target activity, while no off-target toxicity was observed (O’Rourke 2017). In another preclinical study of CAR-T cells targeting IL-13 receptor α2 (IL13Rα2), a tumor of a relapsed patient was detected to have low antigen expression, which indicates the risk of tumor antigen escape (Brown 2015).

An interesting approach to the treatment of solid tumors is targeting transmembrane or extracellular proteins associated with TME, rather than targeting antigens presented on the surface of tumor cells. PD-L1 expressed by multiple tumor types (Pardoll 2012) and EIIIB+ fibronectin splice variant present on stromal ECM and neovasculature of some type of solid tumors (Jailkhani 2019) seem to be good candidates for targeting by CAR-T cells. Deployment of anti-PD-L1 or anti-EIIIB CAR-T cells in mice models for melanoma or colon adenocarcinoma, resulted in a significant delay of tumor growth and improved survival (Xie 2019). Another promising CAR-T cell therapy target, i.e. human epidermal growth factor receptor 2 (HER2) is a tumor associated antigen (TAA) overexpressed, among others, in one of the deadliest human cancers; glioblastoma. The antigen was tested in a few clinical studies and one fatal event following the administration of HER2-specific CAR-T cells of a third generation was reported (Morgan 2010). Despite that, research on the target continued, and in recent studies, with second-generation CAR-T cells, no toxicity was observed (Ahmed 2017). In this clinical study, both the safety and clinical benefit of infusion of autologous HER2-CAR-T cells were evaluated. Out of 16 evaluable patients, 1 had a partial response lasting for more than 9 months, and 7 had a stable disease, ranging between 8 weeks and 29 months (with 3 of them remaining free of progression during 24‒29 months of follow-up) and no off-target toxicities were observed (Ahmed 2017).

Currently, over 100 clinical trials including therapies for hematological and solid tumors are being conducted with the use of TCR-T cells. Less than one fifth of them are against hematological malignancies, which reflects a high potential of engineered T-cell therapy for solid tumors. As we mentioned before, CAR-T cells can recognize only surface molecules, which limits the number of possible therapy targets (no more than 28% of cell proteins are expressed on the cell surface) (Uhlén 2015). TCR-T cells respond to intracellular protein fragments presented as epitopes in the context of the patient’s individual HLA molecules. The advantage of this approach is that it can be directed against not only TAA, but also to tumor specific antigens (TSA) like neoantigens – unique intracellular mutations that are exclusively expressed in neoplastic cells. Despite this advantage, there were also severe side reactions reported, including deaths (Parkhurst 2011, Linette 2013, Morgan 2013).

The most tested antigens, targeted in TCR-T trials, belong to a group of cancer-testis antigens, like NY-ESO-1 (n=34) and MAGE (n=9). Almost eighty percent of TCR trials (79 of 102) are restricted to patients with the most common HLA type HLA-A02 (Pinte 2021). NY-ESO-1-specific TCR-T cells have induced objective responses observed in more than 50% of patients with synovial cell sarcoma, melanoma, and myeloma (Robbins 2011, Rapoport 2015, Robbins 2015). In another clinical study, MAGE-A4-specific TCR-T cells persisted in vivo for a prolonged time in the therapy of esophageal cancer and three patients showed minimal neoplastic changes for over 27 months (Kageyama 2015). At the moment, only a few ongoing trials are targeting TSA and these are: TGF-β receptor II polymorphisms in colorectal cancer, EBV-LMP1 (the latent gene products of Epstein-Barr virus) epitopes that are highly expressed in EBV-associated nasopharyngeal carcinoma, and KRAS G12V present in pancreatic cancer (Pinte 2021). Such a small number of trials is likely due to the fact that such targets require performing sequencing, HLA-typing and determining effective TCRs that can be used for small groups of patients only, which takes a lot of time and is very expensive.

It seems that TCR-T cell therapies are still at the beginning of their path, especially while being compared to CAR-T cell therapies (Fig. 2). In spite of the ever increasing number of clinical trials, about 57% (n=48) still have recruiting status and only less than 25% (n=20) of them are either terminated or completed. About 42% of these trials (n=35) are in phase 1 and 33% of these trials (n=28) are both in phase 1 and phase 2, showing that most of the TCR-T cells therapies are in the early stages of development (Ping 2018).

Developing T cell therapies for solid tumors seems to be much more complex than for hematological malignancies. Finding a target antigen that is expressed on all tumor cells and absent on healthy tissue is challenging. Additionally, unlike hematological malignancies, solid tumors are much more heterogeneous and reveal multiple mechanisms of resistance to the therapy. The most common obstacles in solid cancer treatments are: the immunosuppressive TME, reduced antigen presentation, the tumor escape phenomenon, the insufficient T cell longevity at the tumor site and the off-target toxicity.

TCR-T therapies need to be more personalized and can be applied for only a small number of patients (TAA/TSA expression in matched HLA type). On the other hand, although there may be less antigens available for the CAR-T cells, there is no HLA restriction and thus more patients can benefit from one therapy.

So what about the future of adoptive T cell therapy? Despite the described issues with the use of modified lymphocytes, we can be optimistic. The growing knowledge of cancer biology and the constantly increasing number of clinical trials, using a combination approach such as administration of antibodies blocking overproduction of inflammatory cytokines or checkpoint inhibitors, genetic modifications such as “safety switches” or resistance to negative regulation and targeting multiple antigens, will certainly improve the safety and effectiveness of these therapies.

Finally, preclinical and clinical studies using other cell types with modified receptors like natural killer (NK) cells (Liu 2021) and macrophages (CAR-M) called the “trojan horse for solid tumors” (Chen 2021) give promise in the unequal fight against solid tumors. These recent and encouraging results will probably contribute to the increased interest in research on modified NK cells and macrophages in cancer treatment. We will touch more on these novel therapies types in the following blog posts. 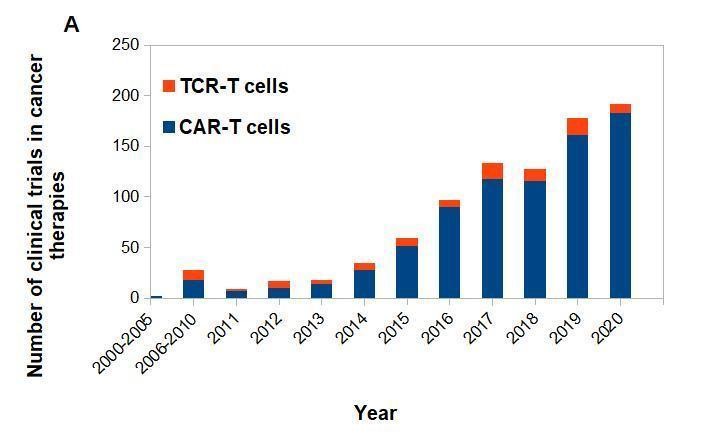 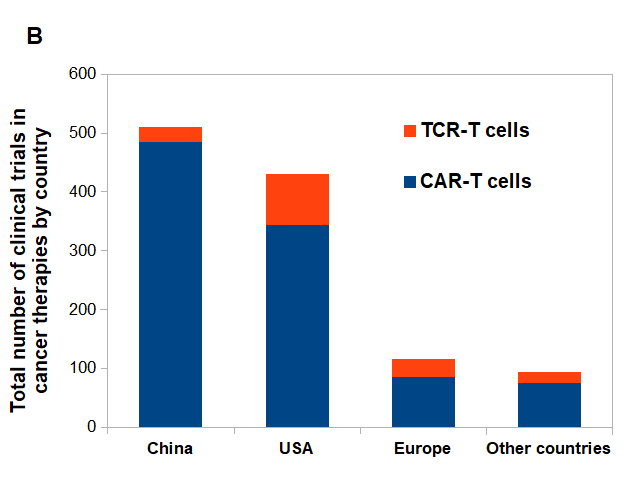